The HI93703 is a high accuracy benchtop turbidity meter used to determine the turbidity of water and wastewater with high precision in the field as well as in the laboratory. The HI93703 meets and exceeds the requirements of the ISO 7027 Method for turbidimetric measurements. For the best value, the HI93703C kit comes complete with AMCO-AEPA-1 primary turbidity standards used for calibration and performance verification.

The HI93703 Portable Turbidity Meter is specially designed for water quality measurements, providing reliable and accurate readings, even within low turbidity ranges. The instrument is based on a state-of-the-art optical system which guarantees accurate results, assures long term stability, and minimizes stray light and color interferences. Periodic calibration with the supplied standards compensates for any variations in intensity of the LED light source.  The 25 mm round cuvettes composed of special optical glass guarantee the repeatability of turbidity measurements.

Single Beam Design - The HI93703 measures turbidity using a light detector at 90° for detection of scattered light. Turbidity measurements can be made in the 0.00 to 1000 FTU range.

ISO Compliant -  The HI93703 meets and exceeds the requirements of ISO 7027 method for turbidity measurements by use of an infrared LED light source. As this meter has been designed to follow this ISO method, the units are displayed in FTU (Formazine Turbidity Unit); FTU is equivalent to the other internationally recognized unit of NTU (Nephelometric Turbidity Unit).

AMCO AEPA-1 Primary Turbidity Standard - The AMCO AEPA-1 supplied standards are recognized as a primary standard by the USEPA. These non-toxic standards are made of styrene divinylbenzene polymer spheres that are uniform in size and density. The standards are reusable and stable with a long shelf life.

Low Battery Indicator – A "LO BAT" indication will appear on the lower right corner of the display when the batteries are low and need to be replaced. At this point, the instrument can still perform approximately 50 measurements. When the battery is too low to perform reliable measurements, a message appears and the meter will automatically switch off.

Turbidity is one of the most important parameters used to determine the quality of drinking water. Once considered as a mostly aesthetic characteristic of drinking water, significant evidence exists that controlling turbidity is a competent safeguard against pathogens. In natural water, turbidity measurements are taken to gauge general water quality and its compatibility in applications involving aquatic organisms. The monitoring and treatment or wastewater was once solely based on the control of turbidity. Currently, the measurement of turbidity at the end of the wastewater treatment process is necessary to verify that the values are within regulatory standards.

Turbidity of water is an optical property that causes light to be scattered and absorbed, rather than transmitted. The scattering of light that passes through a liquid is primarily caused by the suspended solids present. The higher the turbidity, the greater the amount of scattered light. Even a very pure liquid will scatter light to a certain degree, as no solution will have zero turbidity.

The ISO standard for turbidity measurement uses infrared wavelength of light that is outside the visible spectrum. The primary benefit of the ISO method over the EPA method is the reduction of color interference. The EPA method uses a tungsten lamp that produces light that contains all of the visible wavelengths of light that we see as white. A solution that is colored will be adsorbed by a complementary wavelength of light which will affect the turbidity reading. Since the ISO method is outside the visible wavelength of light the color in the sample does not interfere with the measurement. The USEPA prefers the tungsten lamp since it provides for better accuracy at low ranges and drinking water should not be colored. The requirements of an optical turbidity meter for the measurement of diffuse radiation used in low range measurements (i.e. drinking water) expressed as formazin nephelometric units (FNU) according to ISO 7027:1999 are:

The light beam that passes through the sample is scattered in all directions. The intensity and pattern of the scattered light is affected by many variables, such as wavelength of the incident light, particle size and shape, refractive index, and color. The optical system of the HI93703 includes a LED, and a scattered light detector (90°).

The lower detection limit of a turbidimeter is determined by stray light that is detected by the sensors but not caused by light scattering from suspended particles. The optical system of the HI93703 is designed to have very low stray light, providing highly accurate results for low turbidity samples. 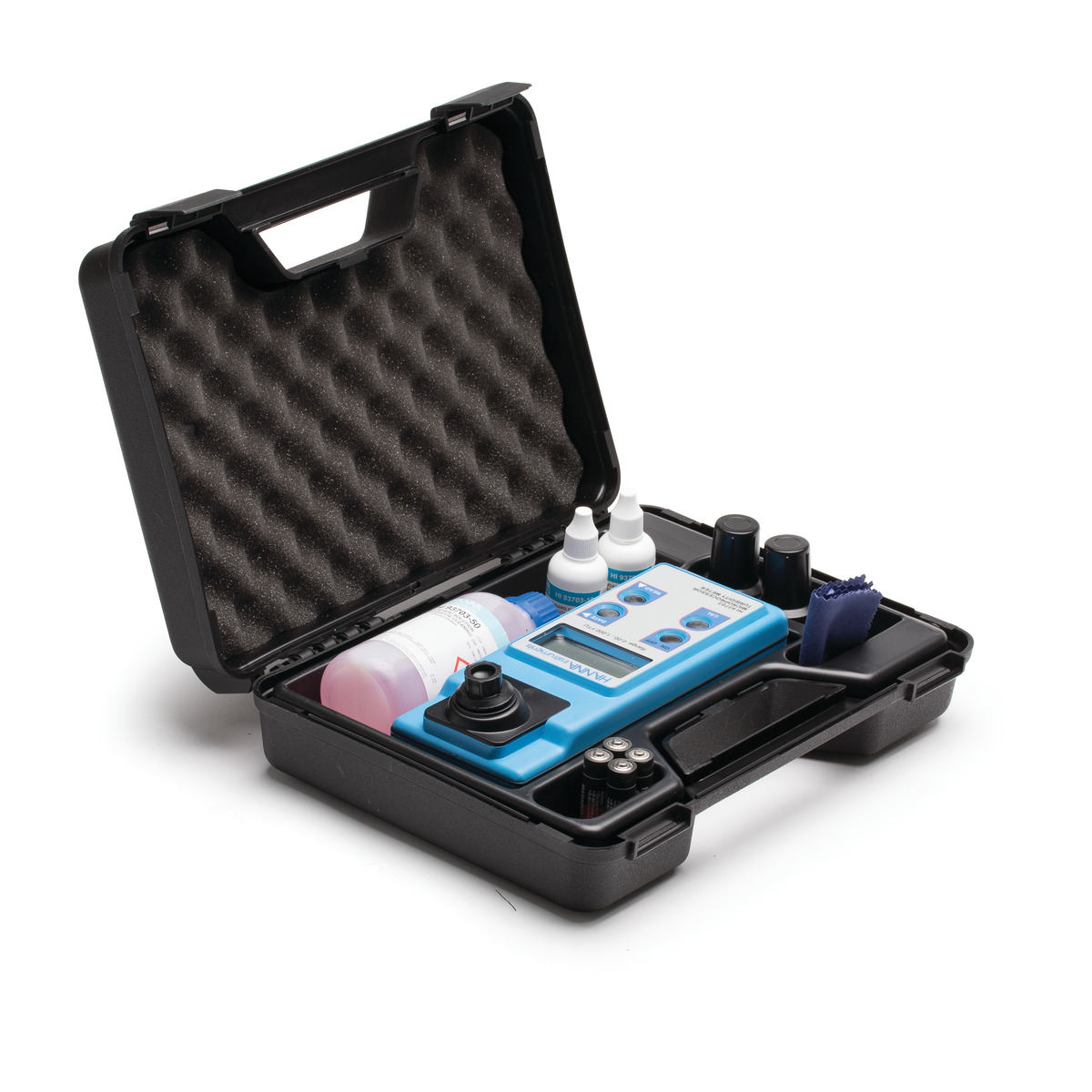 The AMCO AEPA-1 standards for HI93703 ensure that measurements are traceable to a primary reference materials. These standards are used for calibration and performance verification of the turbidity meter.

Supplied with Certificate of Analysis