The HI847492 Haze Meter is a highly accurate portable meter for beer analysis that reflects HANNA's years of experience. The HI847492 is ASBC (American Society of Brewing Chemists) compliant, utilizing a nephelometer to test for turbidity caused by haze. The meter is specially designed for beer quality measurements, providing accurate and precise readings every time.

The HI847492 Haze Meter is specially designed for measurement of haze in beer quality analysis. The instrument is based on a state-of-the-art optical system which guarantees accurate results, assures long term stability, and minimizes stray light and color interferences. It also compensates for variations in intensity of the lamp, although proper calibration ensures measurements are fully validated, comparable, and in compliance with regulatory requirements. The 25 mm round cuvettes composed of special optical glass guarantee the repeatability of turbidity measurements.

ASBC Compliant Measurement - The HI847492 meets and exceeds the requirements of the ASBC method for haze measurements. Measurements are taken from beer samples that have been chilled and degassed, and results are reported in Formazin Turbidity Units (FTU).

Calibration –A two, three, or four-point turbidity calibration can be performed by using the supplied (

AMCO AEPA-1 Primary Turbidity Standard - The AMCO AEPA-1 supplied standards are recognized as a primary standard by the USEPA. These non-toxic standards are made of styrene divinylbenzene polymer spheres that are uniform in size and density. The standards are reusable and stable with a long shelf life.

Fast Tracker™ - For users taking measurements throughout their brewery, the HI847492 is equipped with Fast Tracker™ - Tag Identification System (T.I.S.) that makes data collecting and management simpler than ever. Fast Tracker™ allows brewers to record the time and location of a specific measurement or series of measurements using iButton® tags on specific tanks for quick and easy readings. Each iButton® tag contains a computer chip with a unique identication code encased in stainless steel.

Data Logging – Up to 200 measurements can be stored in the internal memory and recalled at any time.

Data Transfer – For further storage or analysis options, logged data can be downloaded to a Windows compatible PC using the USB port and the HI92000 software.

Beer clarity is a parameter constantly controlled in the brewery. Clarity can be affected by haze, or insoluble or semi-soluble particulate matter which is small enough to form a colloidal suspension in beer, typically less than 2 mm. These particles scatter transmitted light and are observed as a degradation in the brilliance of the beer. To assure consistent product quality, the brewmaster needs more than visual inspection.

Several substances can cause haze in beer, but the most frequently encountered problem is due to a cross-linking of polyphenols and proteins. These materials exist in equilibrium in beer and manifest themselves as a haze when they combine to form insoluble colloids. A range of stabilization treatments is available for avoiding haze problems, and the product has to be controlled in several steps during the brewing process, particularly after filtration and before the beer enters the bright tanks.

The HI847492 is designed according to the ASBC standard for haze in beer measurements, compensating for beer color to guarantee accuracy. The light beam that passes through the sample is scattered in all directions. The intensity and pattern of the scattered light is affected by many variables, such as wavelength of the incident light, particle size and shape, refractive index, and color. The optical system includes an LED light with a 580 nm wavelength, a scattered light detector (90°) and a transmitted light detector (180°).

These meters also incorporate a continuous measurement mode to measure the settling rate of suspended matter, and a signal average mode to accumulate multiple readings, giving a final average value. For beer analysis, the average mode is particularly useful to measure samples with suspended particles with different dimensions.

The HI847492 features a powerful microprocessor that calculates the FTU value from the signals that reach the two detectors by using an effective algorithm that corrects and compensates for interferences of color. The optical system and measuring technique also compensate for fluctuations in lamp intensity, minimizing the need for frequent calibration. 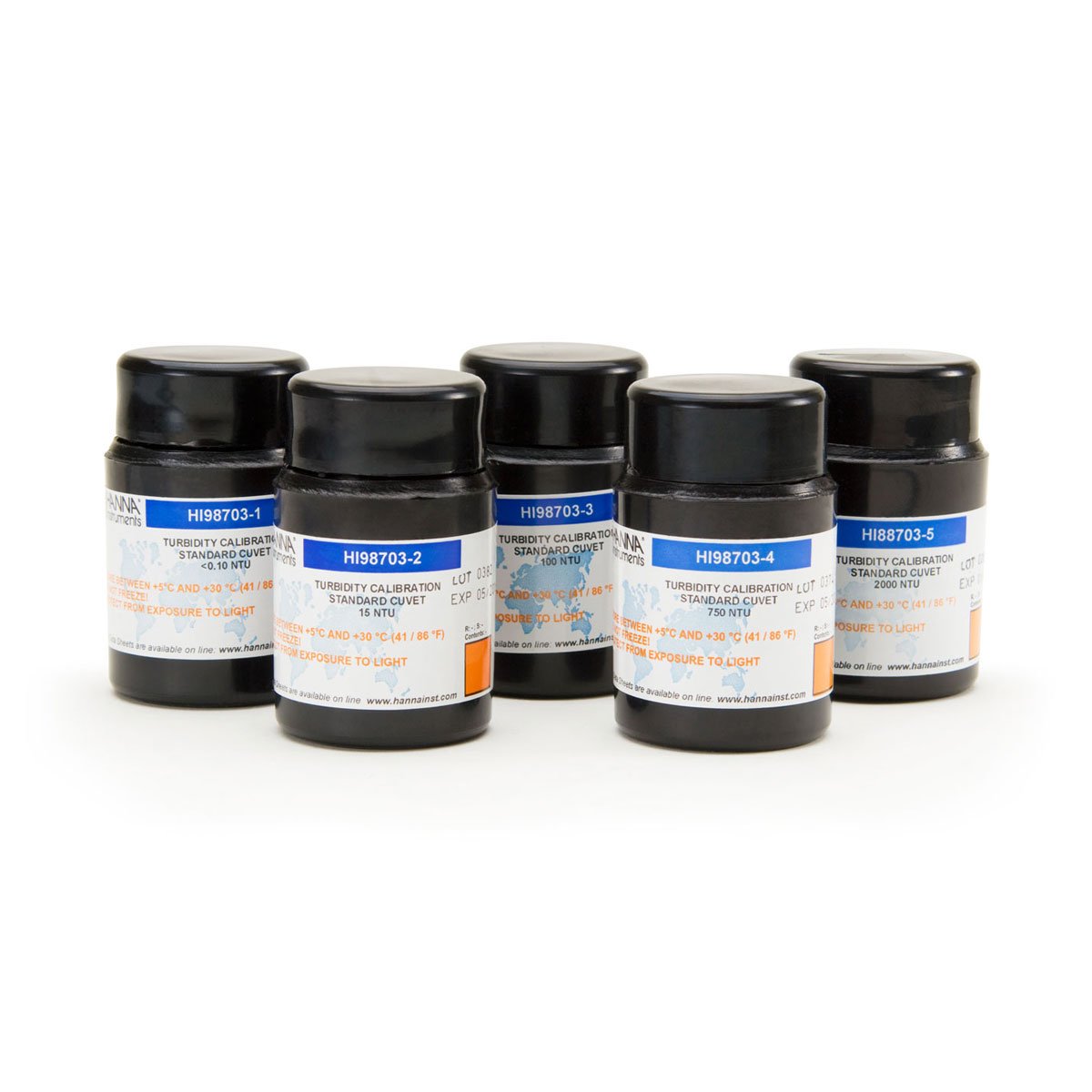 The HI847492-11 AMCO AEPA-1 standards ensure that measurements are traceable to a primary reference materials. These standards are used for calibration and performance verification of the turbidity meter.

Supplied with Certificate of Analysis: